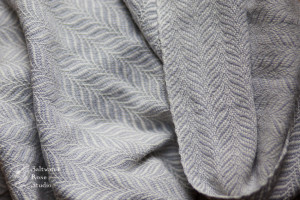 The cream warp that I used on my loaner loom was lovely. 8/2 Venne organic cotton at 24epi in an undulating twill draft. The weft was also Venne but was a pale dusty blue – it reminds me of that grey Atlantic sky and water on an overcast day. Which is most days, let’s be honest.

It’s a small pain to thread this but not as bad as a crackle so I’ll be making another one before too long but hopefully with a silk weft and an Egyptian cotton warp.

It always amazes me how different weaving looks after wet finishing. It just blooms and turns into a fabric, which I made myeslf. From string!

Now I need to overlock and finish the hems and take a finished picture of it in use as a wrap. I had a few broken warp ends due to one overly tight floating selvedge so next time I’ll just use a weighted end.

The loaned loom had a hanging beater so the next warp with the sliding beater will probably feel quite different.